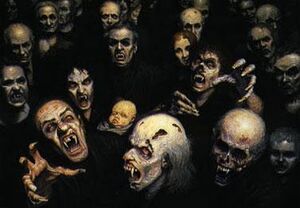 Vampires are the antagonists of I Am Legend. They are humans, both living and undead, who were infected with Vampiris.

There are two kinds of vampires. The first, the "true" vampires, are corpses reanimated by Vampiris. They are mostly mindless creatures, searching for blood to drink and even resorting to cannibalism when other prey is scarce. These vampires exhibit zombie-like behaviour, and are not very strong or intelligent.

The second kind are the living hosts of Vampiris. While they exhibit all the physical symptoms of vampirism, they, unlike the undead vampires, retain most of their higher levels of intelligence and humanity, enough to rebuild society.

Those infected with Vampiris will suffer vampirism-like symptoms; they will go hysterically blind near mirrors, they cannot stand sunlight or garlic, their canines will grow into fangs, and they will develop a bulletproof adhesive and a craving for blood. Vampires with a Christian background will also take the cross as a sign of betrayal and be repelled by it.

Also, due to the bacteria's anaerobic nature inside the body, if a vampire is cut deeply enough, the Vampiris bacteria in their body will sporulate into dust and escape, reducing the former host to powder and killing them.

Vampires have a strong adhesive that bullets cannot penetrate. The living vampires also retain their human levels of intelligence, and both living and undead vampires can use their fangs to suck victims dry of blood.

Retrieved from "https://imlegend.fandom.com/wiki/Vampires?oldid=4718"
Community content is available under CC-BY-SA unless otherwise noted.