I Am Legend Wiki
Register
Don't have an account?
Sign In
Advertisement
in: I Am Legend, Movies

Edit
watch 01:36
We're Getting Mutants in the MCU - The Loop
Do you like this video?
Play Sound 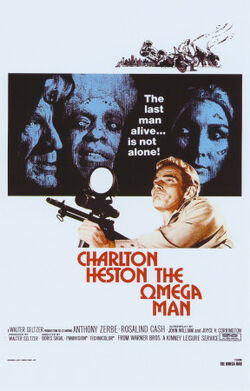 The Omega Man (stylized as The Ωmega Man) is a 1971 science fiction film adapted from the novel, I Am Legend.

In 1975, biological warfare between the Soviet Union and the People's Republic of China wipes out the entire world population. Two years later, Robert Neville (Charlton Heston) and a few that have mutated into a cult of light-sensitive, nocturnal psychopaths, known as The Family, who are partially blind and seek to destroy all technology. Convinced by their fanatic leader, former news broadcaster Jonathan Matthias (Anthony Zerbe), that Neville personifies the twin evils of science and militarism. Neville remains safely barricaded in his elegant, downtown penthouse apartment, where he has hoarded food, liquor and fuel normalcy in spite of the catastrophe around him, Neville patrols the city by day, carrying a machine gun and recording any sign of The Family's activity in hopes of finding and destroying them. After another evening of fighting off attacks led by Matthias and his cohort Zachary, Neville searches downtown in hope of tracking them down. Attempting to suppress his constant anxiety, Neville "shops" in a clothing store and is startled when he sees a young black woman attempting to blend in with the store mannequins. Neville chases the woman, but she escapes by running into a park. Exhausted, Neville trudges into a bar and hearing a noise, descends into the darkened wine cellar where he is attacked by The Family who take him to Matthias. Matthias condemns Neville for not being one of his "family" because he is not infected and declares him "obsolete". Neville maintains that The Family should organize and attempt to find a cure, but Matthias and the others declare Neville guilty and carry him outside to a cart where he is driven to an area just outside of Dodger Stadium. Lashing Neville to a tree, Matthias exhorts his followers to burn the scientist as the bodies of the the dead were burned after initial contamination. Suddenly the stadium lights come one, forcing The Family to collapse in an effort to cover their light-sensitive eyes and skin. An unmutated young man appears and cuts Neville free, then guides him away to the tunnels under the stadium where they are joined by the young woman Neville saw in the store. The woman forces Neville at gunpoint to drive her on a motorbike through the stadium and away from the recovering Family.

At dawn, the couple arrives at a house at the base of the mountains where Neville is stunned to meet a few healthy children. The young man joins the group and introduces himself as Dutch and the woman as Lisa. Dutch tells Neville that he is familiar with his work, as he was a graduate student in biochemistry before the disaster. Dutch explains that neither he nor Lisa and the children understand why they have not been afflicted with the plague, but believes that their youth gives them a mild immunity to the plague; nevertheless, they will all mutate soon and become new members of The Family. Lisa and Dutch then tell Neville that they have brought him to examine one of the young people, Richie, who is on the verge of becoming a mutant. After examining the boy, Neville shocks Lisa and Dutch when he reveals that he is immune to the plague due to a vaccination he developed and took just as the war reached its peak. Heartened when Neville suggests that his blood could be used to make a serum, Dutch and Lisa agrees to let Neville take Richie back to town where Neville has access to laboratories. At Neville's penthouse, he administers the last remaining vaccination to Richie. That evening, Neville treats Lisa to dinner, but they are interrupted by a power outage caused Neville's failure to refuel the generators. While Neville goes to the basement to restore power, Zachary scales the building to the penthouse balcony. Neville restores the lights and returns in time to kill Zachary just as he is about to attack Lisa. Neville and Lisa spend the night together and the next morning, Neville notes that Richie's condition is much improved. Taking Lisa to a laboratory, Neville draws his own blood and sets about making a serum he hopes will work. Pleased, Lisa offers to spend the afternoon gathering supplies for them and Neville returns to his penthouse to find a nearly-recovered Richie. When Neville tells Richie about the serum, the boy expresses happiness that everyone will soon "return to normal". Neville explains that The Family may be too far along in the illness to be saved and should be left dying. Dismayed, Richie criticizes the scientist for his hypocrisy and abruptly reveals that The Family's hideout is the city civic center.

Later, Neville goes to the mountains to report Richie's recovery and the serum development to Dutch, who agrees to join Neville and Lisa the following day. Upon returning to town, Neville finds a note from Richie declaring he has gone to confront The Family to find out if they are as cynical as Neville. The scientist hurries to the civic center where he finds Richie brutally murdered. At dusk, as Lisa returns to the penthouse she runs into a torchlight parade by The Family and, showing signs of the illness, joins them and lets them in at Neville apartment. Back at the penthouse, Neville is confronted by The Family, including Matthias and a dazed Lisa, who destroy his belongings. Neville succeeds in breaking free and, using a large knife, threatens Matthias. Grabbing Lisa, Neville flees outside, but when Matthias calls to Lisa from the balcony, she is confused and breaks away from Neville. As Neville's machine gun jams, Matthias sees the spear dropped by Zachary and hurls it at Neville, impaling in him in the chest. The following morning, Dutch arrives with the children and is horrified to find Neville bleeding to death. Before dying, Neville gives Dutch the serum bottle and urges him to take the collapsed Lisa and the children away to start anew.