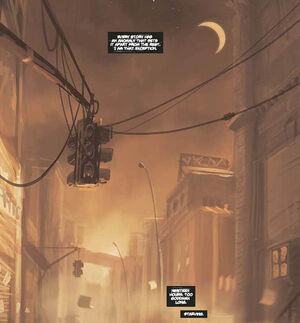 Queens is the easternmost of the five boroughs of New York City. The largest borough in area and the second-largest in population, it is coextensive with Queens County, an administrative division of New York state, in the United States.

During the early stages of the KV outbreak, Carlos Caligid was sent to a crime scene, where there was a stabbing. Carlos was tasked with burning the body due to the risk that it was infected.

Carlos then went in search of shelter from the Darkseekers as dusk began to close in.

Retrieved from "https://imlegend.fandom.com/wiki/Queens,_New_York?oldid=4435"
Community content is available under CC-BY-SA unless otherwise noted.