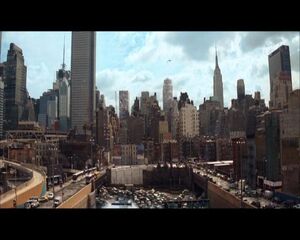 Manhattan is the most densly populated of the five boroughs of New York City and is conterminous with New York County, an original county of the State of New York. The borough consist of Manhattan Island, bounded by the East, Hudson, and Harlem Rivers. Manhattan has been described as the economic and cultural center of the United States and serves as home to the United Nations Headquarters. Wall Street, in Lower Manhattan has been called the financial capital of the world, and is home to the New York Stock Exhange. New York County is the most densely populated county in the United States, more dense than any individual American city. It has estimate 2013 population of 1,626,159 people.

In I Am Legend

In 2008, the Krippin Virus was engineered by Dr. Alice Krippin in Manhattan, and released as a viral cure for cancer.

The following year, on Christmas Eve, KV mutated into a lethal new strain of measles and spread across Manhattan. The borough was qurantined and all bridges and roadways out of the city was locked down. Citizens including Dr. Robert Neville's family began to evacuate Manhattan, going through security checkpoint where they were screened for infection. In effort to prevent the infected from escaping into the rest of the city and the country, the Brooklyn and Manhattan Bridges were bombarded. This, however. this proved to be a failure, since the virus went airbone and proceeded to spread acorss the world.

By 2012, Manhattan had become a decaying ruin, infested with Darkseekers. Dr. Robert Neville spent the previous three years working in his apartment her in search of a cure to the Krippin Virus. He eventually found it, and sacrificed himself so that new arrivals Anna and Ethan could deliver this cure to Bethel, Vermont and restore humanity.

Retrieved from "https://imlegend.fandom.com/wiki/Manhattan,_New_York?oldid=4820"
Community content is available under CC-BY-SA unless otherwise noted.