I Am Legend Wiki
Register
Don't have an account?
Sign In
Advertisement
in: I Am Legend, Movies

I Am Legend (film) 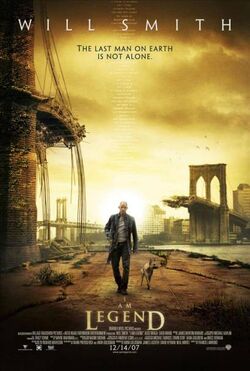 I Am Legend is a 2007 film adaption of the novel of the same name. The film follows the story of Dr. Robert Neville, as he searches for a cure to a vicious, man-made disease. The film was released to theaters on Friday, December 14, 2007.

Dr. Alice Krippin is interviewed about her great discovery, she has changed the measles so that it attacks cancerous cells. She explains that all the cancer patients which her cure has been tested on have recovered so far. The scene jumps to three years later. We see New York City has become an empty and desolate place, devoid of human life. Grass covers roads and buildings, abandoned highways and the city is silent. It seems that apocalypse has arrived.

Robert Neville (Will Smith) is driving through the deserted city accompanied by Sam, his dog. A herd of deer leap across his path and he follows them gives chase at speed in the car. He tries to shoot them and realise it's a hunt. The deer split up and run down a road blocked with abandoned cars. Neville gives chase on foot, trying to hunt one deer down. As he rounds a corner he gets the deer in his gun sights only to be beaten to the kill by a lion. Robert is seemingly torn as to whether to shoot the lion and its family who also enter the scene. At this point his Robert's watch alarm starts beeping and he leaves, taking Sam with him. He leaves without firing the gun. We see Neville's home, it is the typical American detached house, but it looks as though it were in the middle of a war zone.

He dreams of how Zoe (Salli Richardson), his now-late wife and their now-late child Marley (Willow Smith) and Sam try to leave New York. We see Robert dressed in a military uniform: he decides to stay in New York on his own in order to try to stop the Krippin Virus as he is a military doctor. They tell Marley they are going on holiday. The dream scene is interrupted by Neville waking to once again face his lonely life.

Robert and Sam exercise to keep up their strengths and Robert goes to a video-rental store where he talks to the mannequins, his only form of contact with the human form. It seems has created a game for himself to prevent madness from taking him. He later visits some condo flats nearby, watching sadly the remains of the people who used to live there. We see the pain in his eyes as he empathises with the loss of loved ones. Later, we hear the radio message Neville has created and plays over all AM radio frequencies. It says that he's alive, and that he'll be waiting for more survivors at the South Street Seaport at midday everyday.

Sam spots a deer again, so Robert and Sam go after it, the deer runs into an old building below ground level, and Sam goes after it, although Robert has tried to hold Sam back. Robert fearfully and nervously enters the building as Sam will not return of his own accord. Carefully, Robert searches the darkened rooms, he finds the corpse of the deer and Sam, hiding down in a hole, Robert has to shoot one of the infected who appears to be a mutated, anger filled monster called a Darkseeker. Both Sam and Robert start running away through the building, chased by a horde of Darkseekers. He fights them all and both are able to get out of the building unharmed, the Darkseekers cannot run after them because there is daylight outside; they cannot be exposed to daylight as the sun's UV radiation burns them. Soon afterwards, Robert sets a trap to catch one of the Darkseekers. He succeeds in capturing a female Darkseeker (Joanna Numata). As he does, however, the lead Darkseeker tries to rescue her, but is driven back by the sunlight. Robert takes the captured female home, to his lab. He tries the cure he's hopeful for, but it fails as she awakes and nearly attacks him. He revives her and continues to adapt his serums in the hope of finding a cure. He then makes a recorder video of the krippin virus now has completely has taken over humanity and the Darkseekers' social devolution is complete.

That night, he dreams of the past, when his wife and child try tried to leave New York in the chaos of its evacuation. He relives the panic and terror on the streets as the citizens of the city try to escape before the Darkseekers take control. Neville wakes again, with a deeply sad face.

The next morning, he remembers it's his birthday. When he goes to the video store, he finds his mannequins have been moved. During the night the Darkseekers have set the same trap he organized for them the previous day. Neville is caught by the trap and passes out. When he wakes up, he is badly hurt, hanging upside down and bleeding. Sam is faithfully waiting for him. He sets himself free finally just as dusk falls, but his leg gets badly cut with his knife. The Alpha Male from the previous day appear with infected dogs, but Sam defends Robert, killing the Darkseeker dogs, Robert succeeds in crawling back to the safety of his car dragging a badly injured and infected Sam with him.

When he gets home, despite his best efforts to save Sam, the latter shows signs of infection, succumbs to the virus and tries to maul Neville, forcing him to strangle her to death. The next day, he buries Sam's body. In a grief stricken rage he decides to fight the Darkseekers. That night, he drives his car at speed into the hordes of Darkseekers who roam the streets at night. He crashes and the Darkseekers overpower the vehicle. Just as the alpha male is about to kill him, bright light shines on him and he blacks out. While sleeping, he has dreamt about the past once more, this time he's dreamt of the helicopter his wife and child used to escape New York, as it takes off it crashes with another helicopter attacked by Darkseekers and his loved ones are both killed. The people who rescued him are Anna Montaise (Alice Braga) and a boy named Ethan (Charlie Tahan), who have heard Robert's radio message while passing through the city, Robert rejects them coldly at first, but starts to warm up to them.

Later that evening, Robert sees the Darkseekers have followed him, launch an attack on the house; the previous night they had followed Anna back to the house when she rescued Robert. Although Robert's home defenses are comprehensive, the Darkseekers are so great in number they breach the shutters and make their way into the house. Robert, Anna and Ethan retreat to the basement lab.