I Am Legend: Awakening

Edit
watch 01:36
We're Getting Mutants in the MCU - The Loop
Do you like this video?
Play Sound 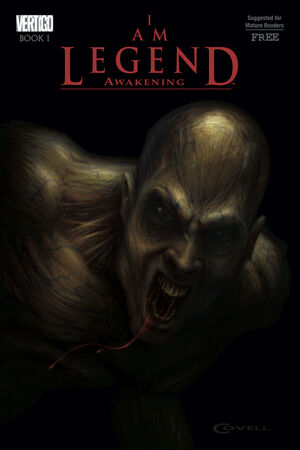 I Am Legend: Awakening is a graphic novel consisting of five different stories. It is a spinoff of the 2007 film, I Am Legend.

Animated versions of the novel's stories, Death As A Gift, Isolation, Sacrificing the Few for the Many and Shelter were included on the special features of the 2007 film's DVD release.

During the early stages of the KV outbreak in Queens, New York, police officer Carlos Caligid recieves an APB reporting a stabbing in an alley. He drives to the scene, and is tasked with taking the body away to be burned, as it could be infected.

Later, as the sun sets, Carlos drives away, in search of shelter.

ADX Florence, Colorado, USA, is the most secure prison facility in the United States. During the early stages of the KV Pandemic, a prison guard enters warden Halloran's office. He informs him that all the prisoners have been loaded into the buses, " 'Cept him of course." The warden then signs a document at his desk, telling the guard to "show him no compassion." As prison buses carrying Halloran, prisoners and guards are driving into the mountains, away from the prison, he says in a voiceover, "Even now, in this time of darkness, he does not deserve it!"

The story then shifts to John Edward Lord, an imprisoned terrorist who was deliberately left behind at the prison to die, with no information on the outbreak. John is left alone in his cell with no food or water, screaming in rage in the deserted prison.

At a military base in Fort Lee, Virginia, the general reports to the colonel that Colorado has been declared a hostile territory. It is then reported that contact with the convoy carrying Halloran has been lost, and the order is given for Colorado's entire power grid to be shut down.

In ADX Florence, after three days locked in his cell, dehydrated and starving, as the Colorado power grid is shut down, the electronic lock for John's cell deactivates, freeing him. After drinking from the prison's water supply, John stocks up on ammunition. Planning to start a new life in the wilderness and finish his book, John flees the prison in a stolen SUV, and drives off into the sunset.

In the night, while driving through the desert, John comes across the wrecked and overturned prison buses from ADX Florence, and the mangled corpse of Halloran. When John gets out of the SUV to investigate, a Darkseeker jumps down from atop one of the wrecks at him, prompting him to shoot it. It is then revealed that the wrecks are infested with Darkseekers. As John flees in his SUV from the Darkseeker hordes, he, narrating the story, explains that the act of terrorism he was imprisoned for was meant as patriotism; he believed that his beloved America had become corrupt and bankrupt, and that it needed to be destroyed and then reborn.

John flees back to ADX Florence, pursued by the Darkseekers. The Darkseekers corner him, and John engages them in a last stand.

Sacrificing the Few for the Many[]

In the early stages of the KV Pandemic, a refugee camp has been opened somewhere in central America, and is taking in patients infected with KV for treatment. As a young boy and girl watch from the outskirts of the camp, a military convoy arrives. The soldiers, dressed in NBC suits, open fire, massacring both the patients and personnel. A soldier then throws a grenade into the camp, destroying it. As the convoy leaves, the children stare in horror and grief at the camp's disintegrated remains. The girl then weeps tears of blood, revealing that she is infected.

In New Delhi, India, during the KV Pandemic, Vatsala and her family are preparing to evacuate to a shelter. That night, Vatsala sneaks out of her home and into the chaotic streets of the city, and sees her boyfriend, Pritam, atop an overturned bus. As the two embrace, Pritam begs Vatsala to return to the shelter without him, and promises that he will be waiting when Vatsala comes out.

Vatsala returns to her home, and, through a secret passage in the house, goes through the underground network of tunnels to the shelter. However, her father, fearing she may be infected, refuses to let her in for 48 hours, declaring that if Vatsala is ill, "We've already lost you." Vatsala swears to herself to never forgive her father for this.

Vatsala spends the next 48 hours waiting outside the shelter with food and water left for her. She begins to suffer the early symptoms of KV, but is in denial that she is infected. Eventually, Vatsala turns into a Darkseeker and tries to break into the shelter. The door to the shelter then unexpectedly opens to reveal vicious-looking monsters instead of her family. In a fit of rage, Vatsala brutally kills the creatures, then, hungry, devours their remains.

Remembering Pritam will be waiting for her, Vatsala goes out into the desolate city, to the overturned bus. There, she is greeted by the now-Darkseeker Pritam, and leads him back to the shelter for food. There, it is revealed that one of Vatsala's brothers is still alive, and that the creatures in the shelter Vatsala killed were actually her family, who she was hallucinating as monsters. Vatsala and Pritam, seeing the former's brother as a monster, attack and viciously kill him, unaware that he was actually Vatsala's brother.

Death As a Gift[]

In Hong Kong, China, Jinghua Xu sits in her apartment at dawn, writing a note. She then leaves her apartment building, and goes out into the desolate ruins of a lifeless Hong Kong. She travels through the ruined city to a bridge, where she commits suicide by jumping from the ledge. The note Jinghua wrote is then seen in her bloody lifeless hand, the writing on it translating, "My name is Jinghua Xu. I am immune. Beside the infected, I am the only survivor in Hong Kong."

In Miami, Florida, during the first stages of the outbreak of the Krippin Virus, Doug and his wife are driving along the freeway to work, with their children, Luke and Ethan, who they plan to drop off at school along the way. During the journey, the family gets caught up in a gridlock. The mother decides to drop off Doug at work first, and when they turn on the radio, they recieve emergency broadcasts. The bus for Luke and Ethan's school drives by them, and Ethan notices that the driver's eyes are bleeding, revealing that he is infected with KV.

After sundown, Ethan sees other families fleeing the streets outside the car. Doug goes out of the car to investigate, armed with a golf bat. Suddenly, a mob of Darkseekers appear outside the car, dragging the mother out and tearing her to shreds. They then throw the bloody, beaten Doug across the car's hood. Doug begs his children to escape with his last dying breaths.

Luke and Ethan climb out of the car's windows and run, chased by the Darkseeker hordes. Ethan assures a terrified Luke that they will be fine, and the two brothers try to hide under a deserted truck from the Darkseekers. However, a Darkseeker discovers them and tries to drag Luke out from under the truck. Ethan tries to hold on to his brother's hand, but loses his grip, and Luke is dragged away and presumably killed.

Ethan escapes off the freeway from the Darkseeker hordes, and hides in the foliage. He is eventually found by a rescue team, who take him to safety aboard their helicopter. The team tries to question Ethan, but the latter, left grief-stricken and catatonic by his brother's death, does not answer.