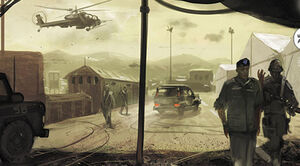 Fort Lee is a census-designated place (CDP) in Prince George County, Virginia, United States. The population was 7,269 at the 2000 census.

During the outbreak of the Krippin Virus, when Colorado was overrun by Darkseekers, Fort Lee declared Colorado a hostile territory and had the entire state's power grid shut down.

Presumably, Fort Lee was eventually destroyed by the virus, along with the rest of the world.

Retrieved from "https://imlegend.fandom.com/wiki/Fort_Lee,_Virginia?oldid=4436"
Community content is available under CC-BY-SA unless otherwise noted.