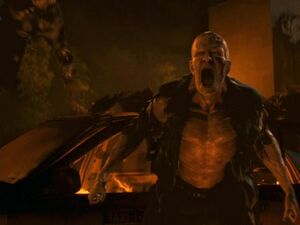 Darkseekers are zombie vampires in the 2007 film adaption, I Am Legend. They are the humans susceptible to the Krippin Virus who were infected, but did not die from it.

While those infected with KV who survive it develop primal behavior upon succumbing to the virus and becoming a Darkseeker, they do retain enough of their higher intelligence to build and copy complex traps they have previously seen. Darkseekers' adrenal glands give them increased mobility. The increased metabolism also speeds up Darkseekers' heart rate, breathing speed and body temperature, and makes them constantly hyperventilate.

Other symptoms of KV include dilated pupils, inflamed gums, hair loss, albinism, and a primal state of madness. Another major symptom is a severe intolerance of UV radiation, causing sunlight and other sources of ultraviolet to burn Darkseekers. Because of this intolerance of UV, Darkseekers are forced into a nocturnal life cycle; lurking in dark, derelict buildings during the day, and only leaving at night. The intolerance of UV is also so extreme, exposure to sunlight for more than a matter of seconds can be fatal to a Darkseeker they also still have some sort of emotions shown in the film when Neville takes a female infected and the "leader" is trying to get her back from Neville.

As their adrenal glands are constantly open, Darkseekers possess adrenaline-enhanced speed and endurance. Darkseekers apparently also gain a heightened sense of smell, as Neville had to bleach the scent on his home's doorstep before sunset, and the female specimen was easily drawn by a sample of Neville's blood.

Darkseekers also retain enough of their higher levels of intelligence to set up elaborate traps they have previously seen, such as snare traps.

Darkseekers also possess adrenaline-superhuman strength as they can destroy the glass of Neville's SUV and smash its car doors.

Community content is available under CC-BY-SA unless otherwise noted.