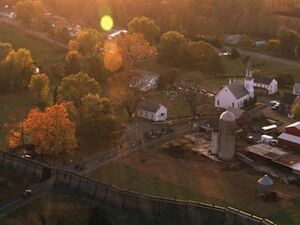 After the KV outbreak, Bethel was turned into a refugee colony. The colony is apparently a village-like community, heavily protected by massive walls from the Darkseeker-infested outside world. There are also soldiers that stand guard just beyond the gates. After the outbreak, people outside the gates or any other refugees probably need to be checked for infection before proceeding. Robert Neville didn't believe that the colony existed. He believed that all colonies or evacuation centers were eiether destroyed or abandoned.

Anna and Ethan arrived at the gates to the colony after Dr. Neville's death. They were allowed into Bethel, where they handed over the cure with which to restore humanity.

Retrieved from "https://imlegend.fandom.com/wiki/Bethel,_Vermont?oldid=4722"
Community content is available under CC-BY-SA unless otherwise noted.